By RhymeLovingWriter on Friday, September 29, 2017 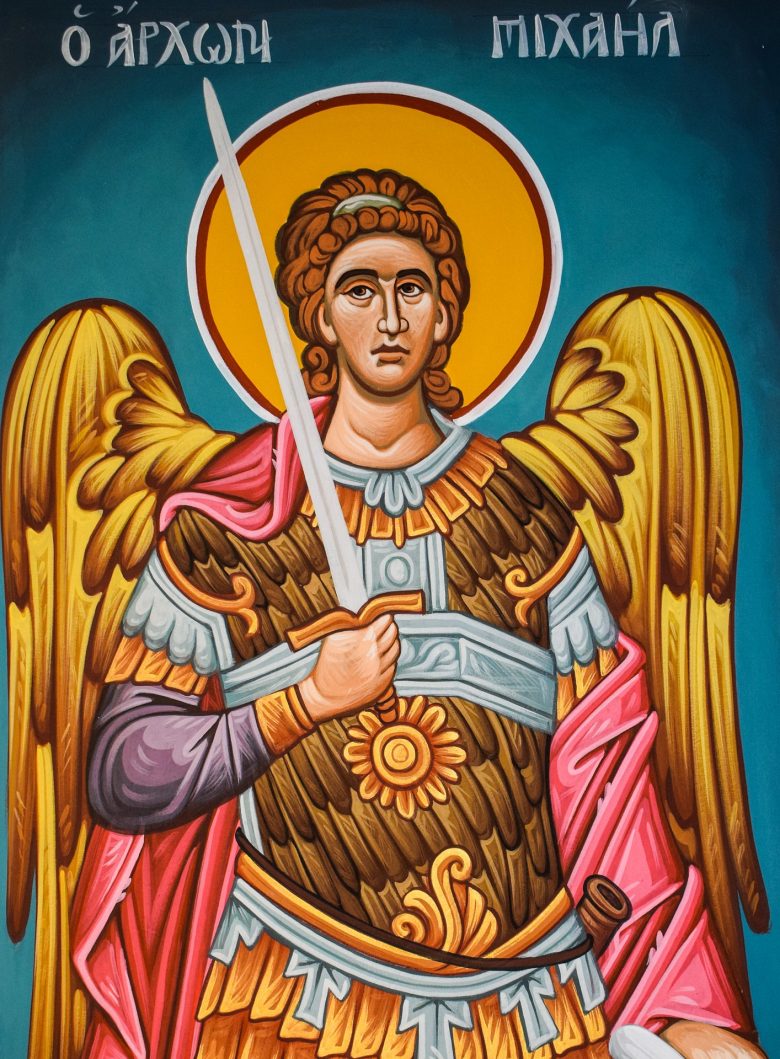 Today the Catholic liturgical calendar marks the Feast of the Archangels.

Archangel – (Theology) a chief or principal angel; in medieval angelology one of the nine orders of celestial attendants on God.

In honor of the day, here is a little quiz to test your knowledge of Archangels.

Tobit 12:15 mentions seven angels, but Catholic tradition holds that only three angels are mentioned by name in Scripture. They are:

I am Raphael, one of the seven angels who stand and serve before the Glory of the Lord. http://www.usccb.org/bible/tobit/12

Archangels are identified as one of nine _____ of angels in Catholic tradition.

Archangels are one of the nine choirs of angels listed in the Bible. In ascending order, the choirs or classes are 1) Angels, 2) Archangels, 3) Principalities, 4) Powers, 5) Virtues, 6) Dominations, 7) Thrones, 8) Cherubim, and 9) Seraphim. http://www.catholicculture.org/culture/liturgicalyear/calendar/day.cfm?date=2016-09-29

Which archangel announced to Mary that she would be the Mother of the Savior?

Most significant are Gabriel's two mentions in the New Testament: to announce the birth of John the Baptist to his father Zacharias, and the at Incarnation of the Word in the womb of Mary. https://www.catholicnewsagency.com/saint.php?n=609

What is the name “Raphael” generally taken to mean?

Saint Raphael, whose name means "God has healed" because of his healing of Tobias' blindness in the Book of Tobit. https://www.catholicnewsagency.com/saint.php?n=609

Would you like to know why? Check out the next question!

What event prompted the writing of the St. Michael prayer?

Pope Leo XIII (pictured at right) wrote the Saint Michael prayer, printed below, in 1884, after supposedly seeing a frightening vision: evil spirits, trying to fulfill Satan’s boast to destroy our Lord’s Church within a century, were engaging in fierce attacks against it. http://www.ourcatholicprayers.com/the-saint-michael-prayer.html Saint Michael, the Archangel, defend us in battle; be our protection against the wickedness and snares of the devil. May God rebuke him, we humbly pray, and do thou, O prince of the heavenly host, by the power of God, thrust into Hell, Satan and all the other evil spirits, who prowl throughout the world, seeking the ruin of souls. Amen.

Which angel is said to have appeared to the children of Fatima prior to the appearances of Our Blessed Mother?

Michael the Archangel said to the three children at Fatima, "Fear not. I am the Angel of Peace. Pray with me." Then he prostrated himself, and repeated three times: "My God; I believe, I adore, I hope, and I love Thee! I beg Thee forgiveness for those who do not believe, do not adore, do not hope, and do not love Thee!" http://www.catholic.org/news/national/story.php?id=34517

By tradition, which archangel is said to have stirred the waters in John 5:1-4?

Raphael is also identified with the angel in John 5:1-4 who descended upon the pond and bestowed healing powers upon it so that the first to enter it after it moved would be healed of whatever infirmity he was suffering. https://www.catholicnewsagency.com/saint.php?n=609

By tradition, which archangel is said to have comforted Jesus during his passion in Gethsemane?

Christian tradition suggests that it is he who appeared to St. Joseph and to the shepherds, and also that it was he who "strengthened" Jesus during his agony in the garden of Gethsemane. https://www.catholicnewsagency.com/saint.php?n=609

With their whole beings the angels are servants and messengers of God. Because they “always behold the face of my Father who is in heaven” they are the “mighty ones who do his word, hearkening to the voice of his word.” 189 http://ccc.usccb.org/flipbooks/catechism/files/assets/basic-html/page-85.html#

Bonus or Tiebreaker: How many times is St. Michael mentioned in the Catholic Bible?

He is mentioned four times in the Bible, in Daniel 10 and 12, in the letter of Jude, and in Revelation. https://www.catholicnewsagency.com/saint.php?n=609

If you scored well – share this post with a friend. See who gets bragging rights in the end.

Finally, here’s a little archangel poem to send you on your way today:

Feast of the Archangels

A fitting Friday tribute to a powered spirit guise
God fashioned them archangels and as rulers of the skies
with wings and sounds celestial uttered freely up in praise
to Him we sing Hosannas, sounding now and for always

Their messages delivered from His throne to lowly man
revealed in Godly glory; over centuries to span
dear Gabriel to Mary with announcement of a Son
she carried our Redeemer as the fairly chosen one

bold Raphael to Tobit for a healing of his eyes
then Michael, as defender, against Satan’s willing lies
from these is uttered witness of God’s ever present care
His angels in His heaven; you will find them circled there.

Happy Quizzing & Rhyming, Friends
May your guardian angel always have your back!