What is “A Series of Fortunate Happenings”?

Each day television or radio reports and social or print media blast negative news around the globe. No dearth of dire behaviors exists among nations, including our own.  Placing focus primarily on this type of information colors our concept of reality. It eventually crushes our future hopes and dreams. If nothing else, it makes us quarrelsome, with teeth set on edge and wary of interaction.

Occasionally we happen upon a feel-good article which lifts spirits or restores faith in humanity. We marvel at the courageous strength of unsung heroes while silently applauding their model behavior. Sometimes, we share their stories to inspire others as well as ourselves. Unfortunately, good news makes appearances less often than we like.

In effort to change the numbing cycle of disheartening coverage, RhymeLovingWriter™ decided to shine a light every now and then on what is going RIGHT in the world. These posts contain a synopsis of stories where things ended well. This sharing constitutes a Series of Fortunate Happenings (SofFH).

Perhaps these positive stories will provide brief respite in the face of all the bad news blaring out there.

Here’s an idea of the kind of stories to grace this series of posts. 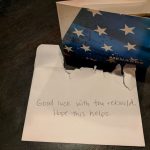 There are many stories which speak of good acts and show the positive side of human nature. Perhaps something similar happened in your own backyard? I’d love to highlight it in this space as I continue the SofFH theme. Comment below or send me a link.

The good that’s done for fellow man
will not attract regrets.
Far likelier the opposite –
since goodness – good begets.
Perhaps a neighbor lent a hand
to grace your world in need?
Your walk, inspired by others’ care,
sustained by loving creed.
In giving self, the greatest gift,
God’s kingdom shines anew;
with sacrifice, conjoined to His,
extending out from you.